LIVE broadcasts are streamed with a brief countdown before streaming. Click on the arrow in the middle of the placeholder image. You will automatically receive the broadcast.

A Beloved Long Island Tradition is BACK!
THE ORCHESTRA AT SHELTER ROCK
Stephen Michael Smith, Conductor

Louise Farrenc, Overture No 1, op 23 Florence Price, Symphony No 1 in E minor Margaret Bonds: Five Spirituals for Voice and Orchestra Anthony McGlaun, soloist Open to everyone - $10 at the door Air conditioned; handicapped accessible; free parking Reception to meet the artists following the concert. Anthony P. McGlaun is noted for his clarity of tone, musicality and expressive delivery of text. He has a BA from Morehouse College and MM from UNI, and has made role debuts with Lyric Opera of Chicago in Porgy and Bess and San Francisco Opera in Showboat. He has also appeared with Spoletto Music Festival and New Orleans Opera. This fall, Mr. McGlaun will appear at the Metropolitan Opera in Porgy and Bess. He is a much sought after soloist, recitalist, and lecturer, specializing in the Negro Spiritual and work of African-American composers of Art Songs. Mr. McGlaun uses these musical opportunities to further the cause of social justice.

The Thing Is, I Love You
Ballads for Voice and Piano, Mostly 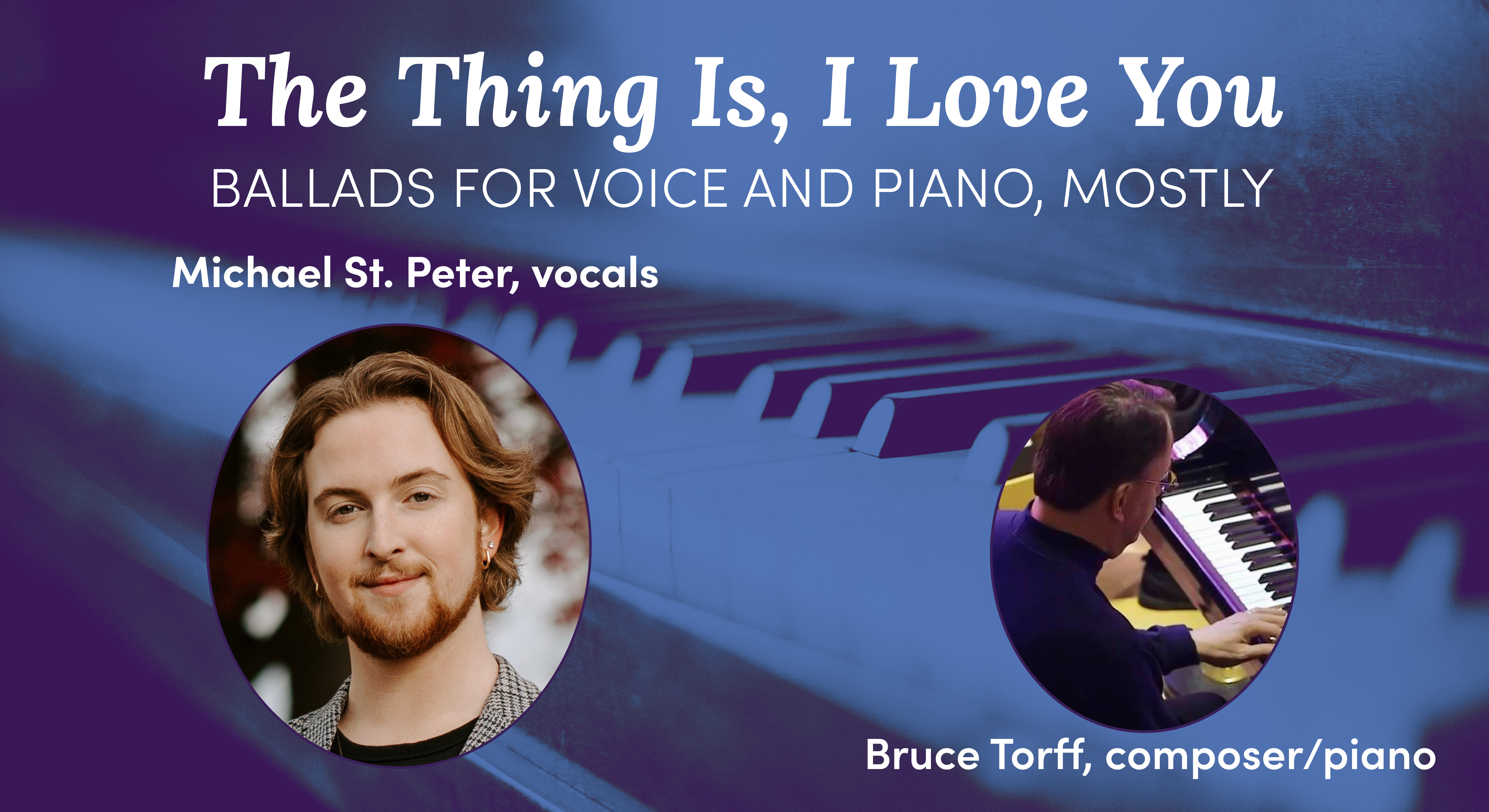 Please watch Handel's Messiah with us and sing along as loudly as you would like.  This will be a rebroadcast of the UUCSR 2019 Messiah Sing.

LIVE broadcasts are streamed with a brief countdown before streaming. Prior to the countdown, you may click on the red arrow in the middle of the placeholder image. The words "Live Stream Offline" will display. When streaming begins, you will automatically receive the broadcast.

A virtual celebration of the artistic and creative talents of Shelter Rock’s children, youth, and young adults. Singing, Dancing, Instrumental Selections, Visual Arts. Host Karin Lyngstad-Hughes. This is an hour you will not forget that will give you hope for the future.

As with many things, the Annual Messiah Sing will take a different form and be virtual this year. Messiah 2020 will include clips from past Messiah Sings at Shelter Rock, personal reflections, and stories from behind the scenes from our choir and soloists, and a new virtual performance of the Hallelujah chorus. Join in to celebrate the holidays in this new, COVID-safe way. First aired: Sunday, December 13, 2020 at 2:00 PM.

Music is an important part of ministry at Shelter Rock! Music helps communicate deep human and Unitarian Universalist values. Shelter Rock is a community where you can look forward to great music.

The Modern Brass Quintet LIVE on the meadow at Shelter Rock on Sunday, September 13, 2020

The UUCSR Choir with Professional Soloists Sunday, December 8, 2019 Each year the Congregation’s 55-voice choir invites the public to join in the performance of selected portions of this cherished masterwork by George Frederic Handel. The entire Part I (Christmas portion) is sung, with selected choruses from Parts II and III rounding out the event.

Leading the performance was conductor Stephen Michael Smith, Music Director of the Unitarian Universalist Congregation at Shelter Rock since 1999, where he conducts the UUCSR Choir and Orchestra at Shelter Rock. He also serves as Conductor and Music Director of the Symphonic Pops Orchestra of Long Island and the Danbury Community Orchestra in Connecticut. His guests conducting credits include the Wroclaw Symphonic Orchestra (Poland), Karlovy Vary Symphony (Czech Republic), St. Petersburg Camerata (Russia), Danbury Symphony Orchestra, New Britain Symphony, Riverside Choral Society, and Schola Cantorum of Harvard University. He has also served as Music Director of the Shrewsbury Chorale and the Dalton Alumni Chorale, having prepared both organizations for their Carnegie Hall debuts. Mr. Smith was selected twice to participate in the opening concerts of the International Northern Baltic Festival at the historic Catherine the Great Theater of the State Hermitage Museum in St. Petersburg, Russia.

Internationally acclaimed soloists Meagan Brus, soprano, Blythe Gaissert Levitt, mezzo-soprano, Michael St. Peter, tenor, and Brace Negron, bass-baritone, were featured in the performance. Christopher Creaghan, Associate Organist for The Riverside Church, was at the facility's mechanical action Jaeckel pipe organ. Mr. Creaghan has performed recitals on many of New York’s largest instruments, and is a graduate of the Manhattan School of Music, an active member of the American Guild of Organists, and past Dean of the New York City Chapter AGO. Members of the Orchestra at Shelter Rock, under the direction of concertmistress Jennifer Ahn, accompanied the choral selections at the performance.

Audience members were welcomed to sing along, or just listen. Musical scores provided at no charge

Led by Music Director Stephen Michael Smith, the choir is a volunteer group supported by four professional section leaders. The choir rehearses on Thursday evenings (except May and June) and Sunday mornings. The music is chosen to enhance the worship experience and the theme of the service. The Annual Music Sunday Service led by the choir is a highlight of the program and the congregational year. 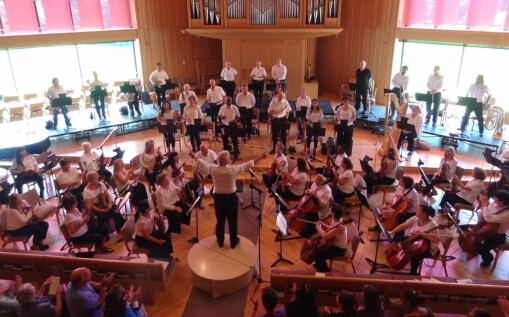 Shelter Rock is the proud host of a traditional orchestra and an Orff orchestra, both of which enjoy enthusiastic followers.

The Orchestra at Shelter Rock

Musicians who play a traditional orchestral instrument and are interested in joining the orchestra should contact Music Director Stephen Michael Smith via EMAIL, or call 516.472.2942.

is a multi-generational music group open to all instrumentalists of all ages. The group focuses on rehearsing and performing compositions by jazz masters and jazz standards, with emphasis on techniques for playing cohesively as a group and for individual and collective improvisation. Moderate proficiency on your instrument and reading music will be helpful to you -- though you will be supported in this -- and no previous jazz experience is required. Ear training, rhythmic study, sheet music, and listening to exemplary works are some of the strategies employed in the ensemble. The Jazz Ensemble rehearses October to May, on Sundays from 9-10:15am; regular rehearsals align with the RE calendar and four to six performances are scheduled during the Sunday service or immediately following. The Jazz Ensemble is lead by Dan Pratt, a highly respected and active member of the New York jazz community and Lincoln Center Education who has performed in venues ranging from The House of Blues to the White House.

Music by Children and Youth

Beginning in the lower grades, the Religious Education (RE) Music Specialist integrates music into the RE program via the Young People’s Choir. It meets in the Music Rehearsal Room Sunday most Sunday mornings at 10:00 a.m. 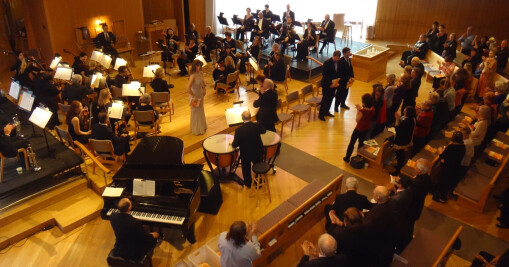 A wide variety of performances are held throughout the year (often on Sunday afternoons). Some are annual events and some are special events.

Video recordings of various concerts can be seen here:

Questions about Music at Shelter Rock?

For more information about the Shelter Rock choir or orchestra, or any musical performance, please contact: 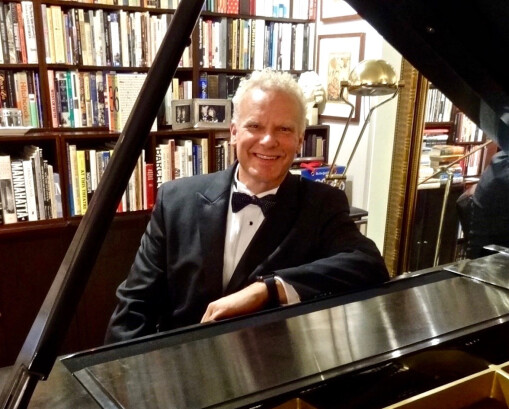