Below is a complete summary of our methodology and our findings into executive transitions.

Veatch commissioned long-time racial justice activist and two-time former Executive Director Rinku Sen to design and conduct a research process consisting of a grantee survey and five focus groups. The team tested the survey with four non-grantees who are Executive Directors and refined it based on their feedback.

Veatch has 190 grantees. We excluded 2 grantee organizations whose specific structure was not relevant to this study. We asked Executive Directors demographic questions and then asked them to reflect on their experiences raising money, maintaining effective boards, and accessing effective technical assistance (TA) during their first two years on the job.

Of the 188 grantees, 116 (62.7 percent) completed the survey. At the end of the survey, we asked for volunteers who were willing to talk further with the research team about their experiences. More than 60 people responded to this request. These high response rates indicate that the question of transition support for new directors, analyzed through a race, gender, and education lens, is of major concern to these organizations. Below are some key profile characteristics of the survey respondents:

After the survey stage of the project, we conducted five focus groups by Zoom with 23 executive directors who volunteered to talk more about their experiences. Three of the focus groups were demographically specific; two were diverse by race and gender. The focus groups dug deeper into these questions:

We asked executive directors what actions their funders took during their first year on the job, allowing multiple responses per person. This is key to our methodology because not all the funders for a specific organization necessarily behave in the same way, and therefore what we are trying to understand is not—only—if an organization’s leader experienced a specific reaction from funders, but the extent to which they experienced the different possible reactions from all of their funders, and how does this compare to the transition experience of other directors from different backgrounds. Given that respondents were allowed to select more than one option, the percentage totals do not add 100 in most of the categories. 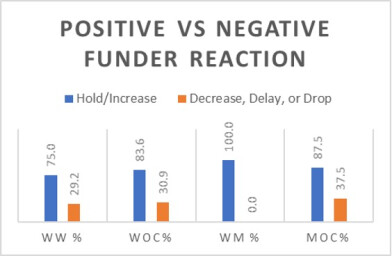 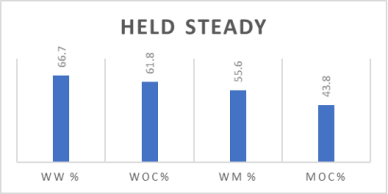 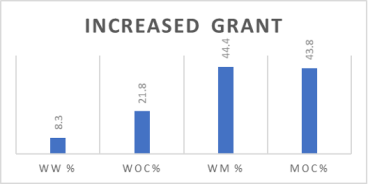 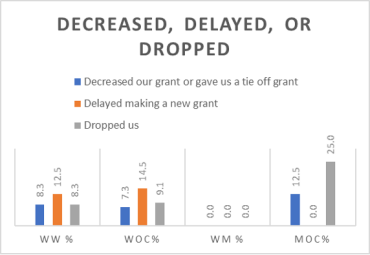 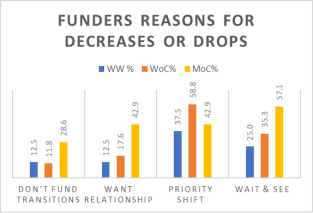 On funders’ reactions, from focus groups:

Executive directors of color following long-time white directors can have a particularly hard time with the transfer of funder relationships, in part because of the funders’ relationships with their predecessors.

The participants in the focus groups explained that a transition period usually lasts at least two years, and transition money is needed throughout that period.

The effects of funding decreases: 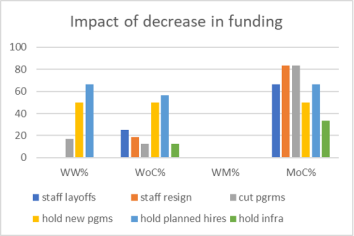 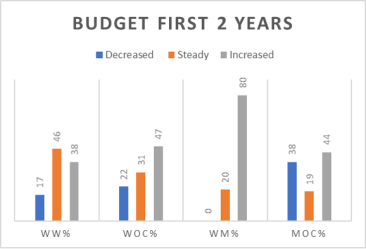 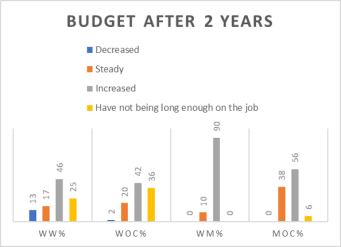 Mentors and peers are a critical source of support, especially for women directors. This was the most frequent response to the question of which factors, internal or external, fed the directors successful transition. People found these supports through various means. Often a group of directors in their city or region will create an informal group that gets together and shares experiences, advice, templates, and sympathy. In other cases, a local foundation supports a cohort with convening and facilitation money, enabling leaders to get together. Many people participate in both general and identity specific cohorts. These peers and mentors play invaluable roles in helping transitioning directors work out the vagaries of non-profit systems, learn about resources, compare notes on consultants and most importantly, develop and maintain the emotional endurance and maturity to do the work well. 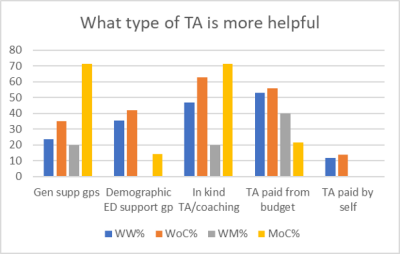 On mentoring and peer learning, from focus groups:

On in-kind technical assistance and coaching, from focus groups:

Flexible in-kind technical assistance: The most frequently cited cause of unhelpful technical assistance or coaching was a mismatch between the executive directors’s organizational needs and the provider’s scope of work. Respondents appreciated having a pool of providers to choose from, noting that the preparation for a TA or coaching contract was itself a barrier. Drafting the scope and finding and vetting appropriate consultants are all elements that directors could likely use some help on. They like foundations to supply multiple possible providers from whom they can choose the best fit.

Coaching: The whole leadership team of an organization in transition requires support, so that everyone responsible for new structures, policies, and norms has help for change management.

On technical assistance, from focus groups:  Technical assistance on specific aspects of organizational management have been critical. The first step is often an assessment of the executive directors’s existing skills and knowledge base, followed by specific, targeted resources. Participants most frequently mentioned finance, supervision, and fundraising as key TA needs. Not all directors have had experience of non-profit management. People moving from the labor movement to community organizing, for example, will not know the foundation world or private philanthropy since union organizations are almost entirely funded by dues. Many directors who have been internally promoted have little finance experience, especially if their prior jobs were in program.

On Staffing: Executive directors needed the most help learning how to supervise, managing change efforts such as restructuring to create as little disruption as possible, and finding good staff who could understand the purpose and culture of the organization. Veatch grantee directors feel they have a mandate for hiring, promoting, or appointing from within, so the most important processes include training, coaching, and assessment of skills and attitudes.

TO RETURN TO THE "EXECUTIVE TRANSITIONS" MAIN PAGE, CLICK HERE.